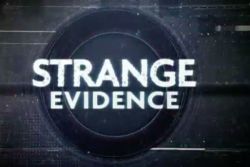 In Strange Evidence, a team of experts analyses footage that seems to defy explanation, including levitating cars on a freeway, a statue that appears to move on its own, and a spontaneous burst of flames.

Season 06 Episode 04 — Tsunami of Fire
A security camera captures panic in Lima, Peru, as a wave of fire chases terrified citizens down a city street claiming 30 lives; experts uncover reports of a disastrous fuel tanker accident with an inadequate and fatal safety response.